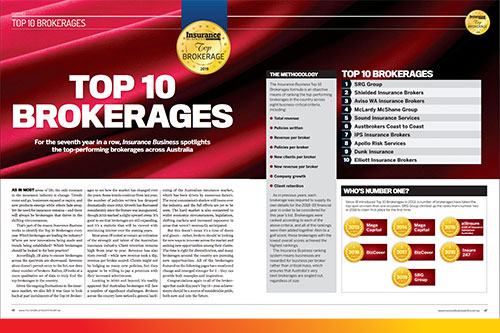 We are extremely proud to announce Aviso WA listed third in the Insurance Business – Top 10 Brokerages in Australia for 2019.

Since its humble beginnings in Midland in 1983, Aviso WA Insurance Brokers has grown into one of Western Australia’s largest mid-tier brokerages. Though perhaps best known for servicing outer suburban Perth and the WA Wheatbelt via offices in Northam and Merredin, Aviso WA’s client base stretches right across Australia and encompasses a wide variety of industries, including agribusiness, transport, motor dealers, property owners and more.

The company had numerous highlights in 2019, including the successful transition to a new broker system, the addition of several new senior staff and increases in client base and income. But Aviso WA says its most prominent highlight has been the way in which its team has developed and grown into a professional, positive and dedicated group of colleagues eager to grow and be part of something exciting.

The team also took out the award for Insurance Business Young Gun of the Year back in 2018. We’re very proud.